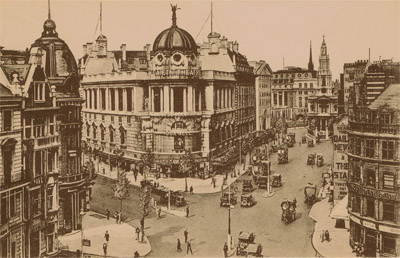 The Gaiety Theatre once stood at the easter end of the Strand, London.

It started it's life as 'The Strand Musick Hall in 1864.  From 1868 it was re-built by John Hollingshead and was re-named as 'The GaietyTheatre'.  George Edwardes started to produce theatre productions in 1885.  The first production that Edmund Payne appeared was a revival of 'Faust Up-to-Date' in 1892.He played 'Mephistopheles'.

'The actor engaged for the part of Mephistopheles fell ill at the dress rehearsal.  A young man was called in who had been on tour under the Van Biene management and done good work.  He was told to study the part as quickly as he could, words,  songs, dances and all.  He worked with a will, having  no sleep at all, and when the night came he gave a very creditable performance indeed. Blessed with a funny face, a funny manner and a very funny voice, with a most marked and decided lisp he did more than 'get by' - he pleased very much.

And, having thus stepped into the breach to save the Gaiety, he remained there as a pillar of the theatre for many years.  For his name was

extract taken from 'Gaiety Theatre of Enchantment by W. Macqueen-Pope

Edmund appeared in many music hall productions at the Gaiety Theatre.  Here are some of the performances he appeared in: 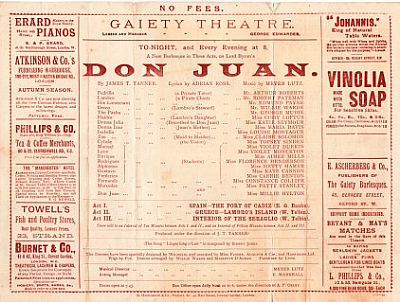 The front cover of