As well as being a well known music hall star Edmund had another passion - cycling.  It was not only a hobbie but a competitive sport to him.

He was president of cycling clubs and competed in many a race.  Edmund even officiated at the cycling events in 1908 Olympics held in London. His role was as an umpire and steward.

Edmund on a wonderful three 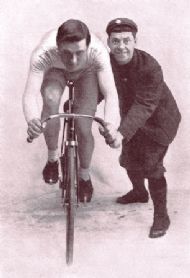 Edmund with Mr G.A.Olley from the Anerley Cycle Club

Edmund Payne rode in the first 24 hour race which was held on the Putney track in 1894.  He rode for nine hours and held 4th place when in the 10th hour he fell off his bike and injured his knee but not before he clocked up an amazing 230 miles!

Photo of the starting line-up of the 24 hour race in 1894.  Edmund is the cyclist on the right with number 1 on his shirt.

In 1899 he won two twelve hour un-paced time trials on the North Road.  He was also the Vice-President of 'The Polytechnic Cycling Club' and the President and Trustee of The Unity Cycling Club.  Edmund's three brothers, Fred, Ernest and Albert were also members of The Unity Club.

Edmund with some of his cycling friends from The Unity Cycling Club.

Edmund was not only the music hall star that enjoyed cycling.  Miss Katie Seymour regularly rode with the Payne Brothers as well as her own brothers.

Edmund with some of his cycling friends.