The Music Hall Guild of Great Britain and America is a non-profit making theatre charity that commemorate the great stars of Music Hall, Musical Comedy, Variety, Vaudeville, Theatre and Pantomime through theatre productions and the care and restoration of their final resting places. Please click on the picture below to view their exciting website.

On Saturday 16th May 2015 Abney Park Cemetery in North London held a Victorian Day.  This was part of the cemetery's 175th anniversary celebrations. The Music Hall Guild was represented with Matthew Neil, in full Victorian dress, hosting a guided walk around Abney Park.  He looks the very epitome of a Victorian gent. 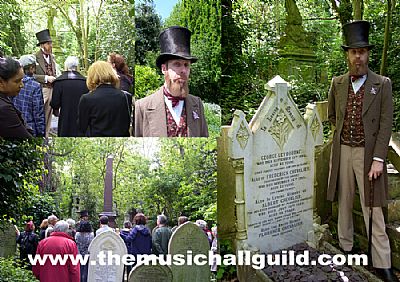