Edmund James Payne was born in Hackney, London on the 14th December 1863.  His parents were Edmund Payne and Eliza Payne nee Ince.  At the aged of 14, he started  working in a very small theatre.  He wrote a burlesque, painted all the scenery and starred in the show.

This was the start of his music hall career.

The first regular company that he joined was referred to colloquially as a 'fit-up'.  This meant that when the company toured England they had to put up their own scenery and was 'fitted up' in assembly rooms and town halls.  It was not unusual to play three or more towns in one week.

Edmund's first main stage appearance was at Market Harborough, Leicestershire in 1882.  This was a music hall pantomime called 'Robinson Crusoe'.  His role was to play a snowball.  There was an unfortunate accident in which he nearly lost his life.  A more detailed explanation is explained in the book 'Edmund Payne - A Gaiety Actor'.

Edmund was also an original promoter of the 'Actors Association'.  It was chiefly against the bogus managers, unsanitary dressing rooms and to campaign for rehearsal work to be paid for.  It was an organisation to look after the actors' business interest and also their physical well being.

Edmund continued his early career touring the country.  It was while on tour that he met his first wife Emily Saxon.  She was born in 1864 in Ardwick, Chorlton near Manchester.  They were married on the 4th January 1888 at The Parish Church of St. John, Middlesbrough.  A report from 'The Northern Echo' stated that a theatrical wedding had taken place.  Guests included Mr Percy Milton of the 'Milton Rays' Company.  Emily belonged to this company.  One of her performances was playing 'Lady Dorothy' in 'The Candidate'.  She toured all over England as did Edmund, from the Greenock Theatre Royal in Scotland to the Gravesend Pavilion Theatre in Kent.  In October 1886 she played Fanny Firth in the Milton Rays production of 'Kindred Souls' at the Queens Royal Theatre, Dublin.

Edmund's brother Fred Payne was also a music hall actor.  The only credit I can find on him is playing 'Timothy Gibbs' in the music hall production of 'Our Miss Gibbs'.  I do not think he was in the same league as Edmund.

Below is the only picture I have of Fred Payne. 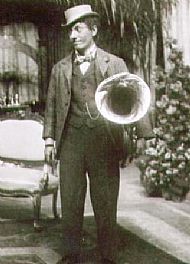